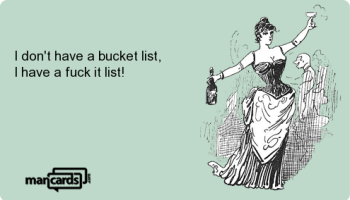 Over the last two years or so, bucket lists have become really popular – a lot of people shared theirs via Facebook etc. According to the Oxford Dictionary, a bucket list is a “number of experiences or achievements that a person hopes to have or accomplish during their lifetime”. It´s based on the term “to kick the bucket” as a synonym for dying. The term was popularized by a 2007 movie feat. Jack Nicholson and Morgan Freeman. So basically, people write down on a list the places that they want to see, things they want to do, and goals the want to achieve. By now, there are specialized internet communities evolving around this topic.

And while I fully endorse goal-setting and following through with them (as long as they are self-concordant goals), having too many too aspirational goals can also be a burden in our life. That´s why I was pleased to stumble upon a sort of countertrend very recently:

It´s a list (in this context) where you put all those things that once may have been on your bucket list – but then you’ve realized that you are too old (or rather: grown-up), too lazy, or simply too “different” compared to the time you put it on the list – to follow through with a specific goal.

With my own personal development, but also with some of my coaching clients, I´ve come to realize that old (outdated) goals can suck up a considerable part of a person´s (mental) energy – which than lacks in the process of pursuing current ones. People sometimes feel as a failure when they have to admit to themselves that they are never going to “climb that mountain” – or whatever it is that they´ve put on their bucket list.

But the truth is: we grow older and life moves on. It´s completely normal to have different priorities in different phases of our lives. When I became a father 2.5 years ago, this totally changed my priorities and my internal value system. And by all means, this also meant erasing some things from my bucket list and putting them on my fuck-it list.

But there doesn´t even have to be an incisive event such as becoming a parent. As I´ve said: sometimes, life just moves on. And if that is so, it can be a liberating experience to consciously let go of some of our childhood or teenage dreams. I´ve dreamt about becoming a professional athlete well into my twenties. But I wasn´t good enough (and probably too lazy as well). Still, goals like that can linger in the back of our heads (and dark corners of our hearts), causing trouble, in the form of regret, disappointment, anger, and most of all: putting energy where it would be desperately needed elsewhere.

Truth be told: when I decided to let go of my dream about becoming the next Boris Becker or Roger Federer, I did not just write it down on a piece of paper; I tried to find something more appreciative. If something truly significant and valuable like a childhood dream has been with you for most of your life, I advise you to “bid farewell” to that goal via a little ritual.

Back then, I wrote my dream on a piece of paper. Then, I put it into a small metal bowl. After that, I sat down on my porch, and took an hour or so to remember all the good things that came out of pursuing that goal: the tournaments I had won in my youth, the friends I had made, and simply all those countless hours of dedicated practice during most of my childhood – which surely have taught me a lot about diligence and resilience – therefore helping me to achieve whatever success I have now in my life as a business man and psychologist.

Then, I set fire to the paper, watched in burn down –  and finally scattered the ashes in the evening wind.