I’m well aware that this is off-topic. And I´m also aware of the fact that some people will think or even say “Shut up! Being German, this none of your business…” But living in a globalized world, and seeing crisis situations such as in Syria or the South China Sea, I definitely do care who will be the Commander-In-Chief of the most powerful army in the world – even when our nations are on friendly terms.

I´m pretty sure Donald Trump (if he gets to be the GOP nominee) will lose against Hillary Clinton, Bernie Sanders, or even Michael Bloomberg, for that matter. But then, you never know…

Here´s the thing that scares me the most. The following is an excerpt from an article on politico.com – where a scientist analyzed the demographics and attitudes of Trump´s supporters:

If I asked you what most defines Donald Trump supporters, what would you say? They’re white? They’re poor? They’re uneducated? You’d be wrong. In fact, I’ve found a single statistically significant variable predicts whether a voter supports Trump—and it’s not race, income or education levels: It’s authoritarianism.

Here´s how the author explains the concept of authoritarianism:

While its causes are still debated, the political behavior of authoritarians is not. Authoritarians obey. They rally to and follow strong leaders. And they respond aggressively to outsiders, especially when they feel threatened. From pledging to “make America great again” by building a wall on the border to promising to close mosques and ban Muslims from visiting the United States, Trump is playing directly to authoritarian inclinations.

With my German heritage, I’m especially wary when I read stuff like that.

I readily admit that The Donald can be entertaining and funny at times. I´d probably even tune in once in a while – if we were the host of a talk show or something like that. But he´s not trying to become that. He´s trying to become the POTUS.

A lot of people have wondered and written about the following question:

How does he do it?

How does he pull off the stunt of gathering all those supporters behind him – while being a blatant liar (frequently), ignorant (very frequently ) and outright mean and ostracizing (practically at all times)? One intriguing answer – that also fits with the analysis of his supporters´ attitudes stated above –  is given in this Forbes article. The author links Trump´s ongoing success to his skillful use of dominant behavior, especially body language:

What Trump does prove is the observation of evolutionary psychologists that humans worship the projection of authority in much the way that animals do.

Personally, I always wonder how somebody can portray such a high level of confidence while making bogus arguments (if you want to call it arguments at all) nearly 100% of the time. Then, I remembered philosopher Harry Frankfurt´s fabulous essay On Bullshit. Here´s the important part:

It is impossible for someone to lie unless he thinks he knows the truth. Producing bullshit requires no such conviction. A person who lies is thereby responding to the truth, and he is to that extent respectful of it. When an honest man speaks, he says only what he believes to be true; and for the liar, it is correspondingly indispensable that he considers his statements to be false. For the bullshitter, however, all these bets are off: he is neither on the side of the true nor on the side of the false. His eye is not on the facts at all, as the eyes of the honest man and of the liar are, except insofar as they may be pertinent to his interest in getting away with what he says. He does not care whether the things he says describe reality correctly. He just picks them out, or makes them up, to suit his purpose.

In light of this, I probably have to correct myself: Trump is not a liar, but rather the biggest (and unfortunately: best) bullshit artist currently living on this planet. Literally, my only hope is that, on the day when he is elected to be the nominee for the GOP, he walks up to the lectern, shows one of his awkward smiles, and says something like: “Sorry folks, this was meant to be a joke. It´s all bullshit. Actually, I just wanted to show the world what a pathetic bunch of bigots most of you are.”

In the meantime, if you´re unsure who to vote for, you might want to watch this hilarious excerpt from Last Week Tonight with John Oliver. Let´s make Donald Drumpf again!

Why is it that liberals and conservatives cannot get along? We´re all human after all, aren´t we? Well…yes. But as you know, there are people who speak different languages which might lead to not being able to understand each other. Turns out, (far) right and left wing supporters may have the same problem – even if they all speak plain English.

One guest lecturer of MAPP´s fourth onsite was Stern School of Business´ Jonathan Haidt. Among other most interesting topics, he conducts research on moral reasoning. What he found has a lot to say on the state of current U.S. politics: Haidt has identified a kind of moral taxonomy, a set of five dimensions that all our moral judgments are based on (see diagram below). The problem is: conservatives tend to use all five dimensions to just about the same amount when making moral judgments. Liberals tend to use only two of them – the other are seen as not relevant. The result: liberals perceive conservatives as being uptight, while the latter perceive the aforementioned to be ‘morally loose’. 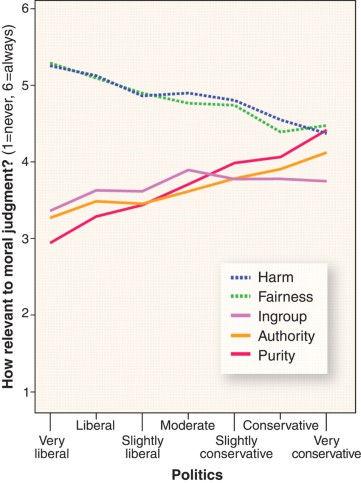