Tempus fugit. The first half of the MAPP program 2013/14 is over. Actually, the second and final semester is well on its way already. New subjects, new lecturers, lots of new homework…

I guess this is a good time engage in a little retrospection – and to have a look at the future as well.

I still remember sitting in the classroom at Penn on the first day, listening to Martin Seligman´s deep and sonorous voice, where he lectured on the history of positive psychology. At some point, one of my MAPP classmates asked him about his vision for positive psychology. What should be its contribution to mankind in the future?

Without much hesitation, Marty told us about his moonshot goal for positive psychology. “By 2051, I want 51% of the world´s population to be flourishing (according to the PERMA outline)”. Now in 2051, Marty will be 109 years old. So there´s good chance he´s talking about his legacy here. Could this be possible? After all, we still seem to be very far away from that number. War, poverty, and hunger are still raging in many parts of the world. But the truth is:

Things are getting better day by day, year by year.

Now I am a die-hard optimist. So if you feel I am not to be trusted, you may trust some experts (and their stats…).

Positive Psychology wants to play its part in this overall development by teaching people the art and science of flourishing – how to lead a meaningful, positive, and accomplished life while being actively engaged in our closer and larger social networks.

Positive Psychology has first been embraced by coaches, psychotherapists, and physicians. It is now entering the workplace more and more. And the next important step will be:

How can we bring Positive Psychology into education, community management, and policy-making? How can we bring it to China and India – those countries that account for almost 40% of the global population?

Marty Seligman believes that we (at least the western/developed world) now are at a Florentine moment in time. During what came to be known as the Renaissance, the Italian city of Florence became very rich via trading, and therefore at the same time developed into a flourishing center for all kinds of arts and culture because of all that affluence. So where are we – today? In Marty´s words (taken from his book “Flourishing”):

The wealthy nations of the world – North-America, the European Union, Japan, and Australia – are at a Florentine moment: rich, at peace, enough food, health, and harmony. How will we invest our wealth? What will our renaissance be?

Time will tell. I´ve decided for myself that I want to be a part of that movement and upward trajectory. Not only does it feel better to be optimistic – it´s also rational. The alternative, being a (fundamental) pessimist, doesn’t make any sense to me (and I´ve got the data on my side…). What´s the use of being pessimistic? I am a young father – and I would love to have more children. How could I want to want this without believing there´s a good (or at least: better) future ahead, without believing this world fundamentally is a good place to live in?

Once again, time will tell. The picture beneath these lines was taken at a party at Marty Seligman´s house when he generously invited the 2013/14 MAPP students and faculty to have a Christmas celebration at his house on December 7, 2013. 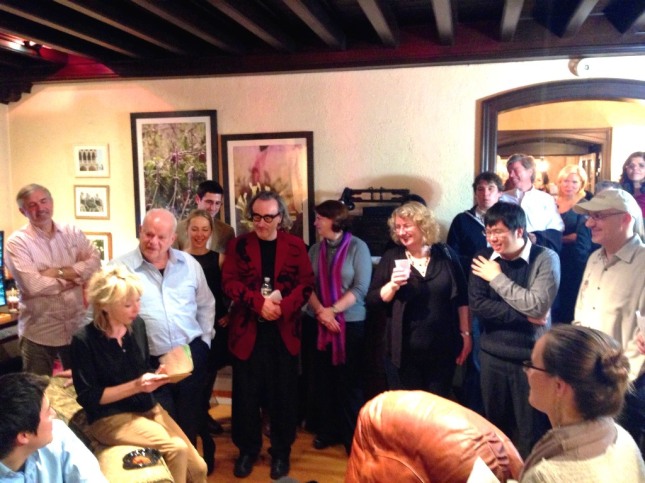 The next day, final day of the first MAPP semester, it was also Marty´s part to speak the closing words. Quite obviously very moved, he cited a passage from Kim Stanley Robinson´s book The Years of Rice and Salt:

“We will go out into the world and plant gardens and orchards to the horizons, we will build roads through the mountains and across the deserts, and terrace the mountains and irrigate the deserts until there will be garden everywhere, and plenty for all, and there will be no more empires or kingdoms, no more caliphs, sultans, emirs, khans, or zamindars, no more kings or queens or princes, no more quadis or mullahs or ulema, no more slavery and no more usury, no more property and no more taxes, no more rich and no more poor, no killing or maiming or torture or execution, no more jailers and no more prisoners, no more generals, soldiers, armies or navies, no more patriarchy, no more caste, no more hunger, no more suffering than what life brings us for being born and having to die, and then we will see for the first time what kind of creatures we really are.”

Time will tell, Marty. But I´m with you…