A few days ago, I shared some research by Carol Ryff and Corey Keyes on the structure of psychological well-being. Today, I’d like to highlight more of Keyes’  work.

When we think about psychological health, we typically have a kind of continuum in mind. On the one end, there are states such as satisfaction and happiness, on the other end there’s (severe) mental illness, e.g., depression and anxiety disorders. And we’re also sure all people can be located on this single dimension at any given point in time. Additionally, the absence of one state is mostly equated to the presence of the other. Accordingly, an individual is perceived as being psychological healthy when there are no signs of mental illness.

Turns out this perspective may be flawed, or rather: incomplete. Using large-scale samples, Corey Keyes is able to show that we should probably see mental health and mental illness as two interrelated, yet clearly separable dimensions. The first one is about the presence or absence of mental health, the other about the presence or absence of mental illness (please take a look at his paper Mental Illness and/or Mental Health? Investigating Axioms of the Complete State Model of Health) 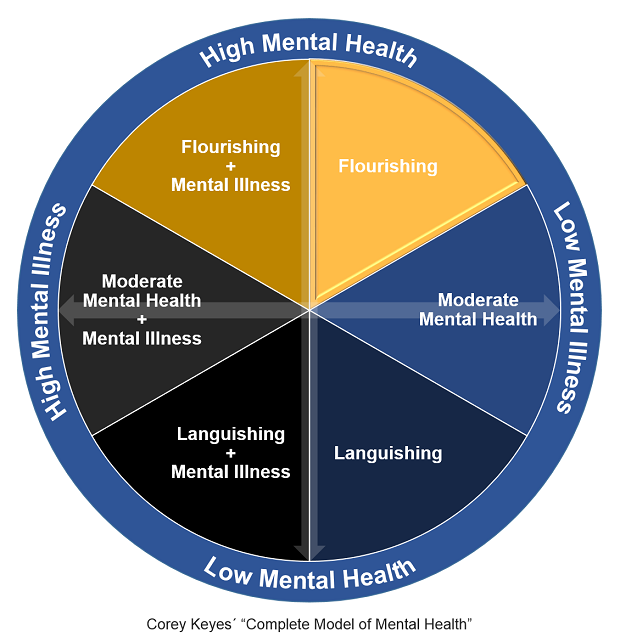 When creating a matrix that is composed of these two continua, we’re able to understand psychological states on a much more nuanced level. By way of example, in his data, Keyes finds there are people who portray distinct signs of mental illness (e.g., depressive symptoms) while at the same time displaying a moderately high level of psychological health (e.g., perception of meaning in life). Conversely, there are quite a few people who are clearly neither mentally ill nor particularly healthy, a state that Keyes calls languishing. In the words of the researcher:

The diagnosis and measurement of mental health […] has provided some invaluable information. First, relatively few adults (i.e., about 2 in 10) who were free of any of the four 12-month mental disorders could be classified as flourishing or completely mentally healthy. Almost as many adults were mentally unhealthy (i.e., languishing) as were mentally healthy (i.e., flourishing), and most adults were moderately mentally healthy. Second, diagnoses less than flourishing were associated with greater levels of dysfunctions in terms of work reductions, health limitations, and psychosocial functioning. Moreover, pure languishing was as dysfunctional (sometimes more) than pure mental illness.

Especially the last sentence should give some food for thought to public health officials and corporate health executives alike. For decades, their focus has been on understanding, assessing, and mitigating mental illness. And while this certainly is an important endeavor, Keyes´ esearch clearly shows that it might be and equally pressing mission to help people find pathways from a state of low mental health (languishing) to high mental health (flourishing).