In order to learn more about the meaning of the word/concept “positive” in “Positive Psychology” (which the following post is all about), I highly encourage you to visit the website of James Pawelski, where he provides an in-depth analysis.

OK. So here´s a question for you: Some higher being has chosen to endow you with super-powers. You get to choose between two different profiles: 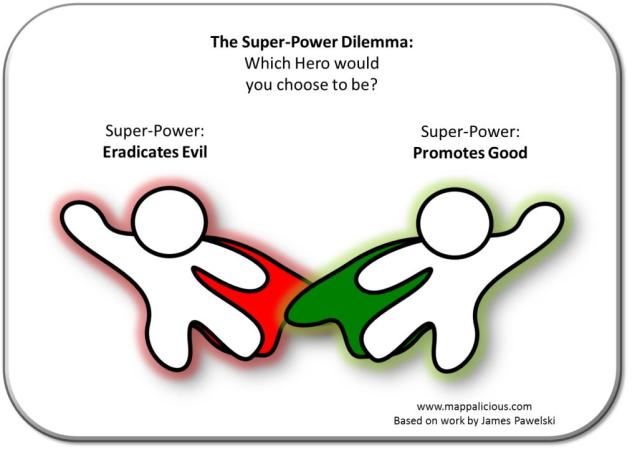 Let me elaborate a bit more on this:

I won´t give you an answer here – because there is no single “right” solution.* But maybe, you´d like to think (or rather: feel) it through – and then share your thoughts in the comment section…?

*Although James Pawelski, MAPP´s academic director and Chief Philosophy Officer, is not too fond of simple and easy answers, he probably would have one for you here. But I´m not going to write it down – so as not to be the spoilsport for future Mappsters and listeners of his beautiful lectures in general…

Luke Skywalker: “Is the dark side stronger?”
Yoda: “No, no, no. Quicker, easier, more seductive.”

If you are one of the few people on the planet that have not seen Star Wars: the dark side (of the Force) was not stronger. As in most Hollywood stories, the good guys win in the end. That´s why we go to the movies in the first place. We want to see an entertaining plot. That means: We want to see the good guy struggling, we want him to take on his challenge. And we want him to win in the end. And they lived happily ever after…

Unfortunately, in real life things look a little different. In real life, “Bad” mostly is stronger than “Good”. I´m not talking about a metaphysical power struggle here, of course. I´m talking about psychological phenomena. Together with some colleagues, MAPP guest lecturer Roy Baumeister has written a review article that goes by the name of this blog post: Bad is Stronger than Good. They´ve gathered tons of empirical evidence on a wide array of psychological mechanisms to lend support to this stance:

This list could go on forever. And: there´s hardly any exception to be found.

But is it really that bad?

Baumeister et al. argue that we may be evolutionary hardwired to put a strong emphasis on negative stimuli in our environment. At the end of the day, 10,000 B.C., it probably was far more “adaptive” (= useful for spreading your genes) to be the first person in a group spotting that saber tooth tiger lurking behind the bush than spotting those sweet blackberry growing on the bush. In other words, there is an all-pervasive negativity bias that influences our thinking and feeling at all times.

So in a sense, every single human being wears the opposite of rose-colored glasses all the time (and mostly without knowing that we do). Now, if this true, for me, there´s another important implication:

If we are evolutionary hardwired to perceive, process, and remember bad information to a much higher extent than positive information, it follows that – on a more objective level – the world actually is a much better place than we think it is.

Now the big question is: What can we do about this inherent negativity bias? How can we overcome this urge to see everything through “concrete-colored” glasses?

Because I really feel we should! While looking out for threats at all times may have been adaptive in the Pleistocene – it probably is not as helpful in the so-called developed world. We live in relative safety. With very rare exceptions, nobody has to suffer from starvation. When we´re sick, we go to the doctor and receive treatment. Most of us die of old age, not of homicide or wild animals. From more than one point of view, this is a good place to live in.

In spite of this, mental disorders, especially depression and anxiety disorders, are “booming” – for decades by now. While this development certainly has multiple causes, I believe one reason is that the negativity bias has become maladaptive in our times. We are bombarded with thousands of messages via different media outlets each and every day. And the sad truth is that most media tend to focus strongly on negative news, events, and stories – precisely because they know we tend to focus on negative events. It drives their reach and circulation. So obviously, we are constantly exposed to a distinctly negatively biased fraction of what happens in this world – using a set of cognitive tools that are distinctly attuned to the worst part of that already distorted view of reality.

We are constantly exposed to a distinctly negatively biased fraction of what happens in the world – using a set of cognitive tools that are distinctly attuned to the unpleasant parts of that already distorted view of reality.

So what can we do?

By now, there´s a lot of scientific evidence on those questions. One finding that has popped up in several different domains of inquiry goes as follows: Good is stronger than bad – but only if good outnumbers bad to a considerable extent. In Baumeister et al.´s words:

“This is not say that the bad will always triumph over good, spelling doom and misery for the human race. Rather, good may prevail over bad by superior force of numbers: Many good events can overcome the effect of a single bad one.”

Let´s look at some examples:

Basically, raising the number of positive experiences in our lives is also one of the essential mechanics underlying positive (psychology) interventions, such as the What Went Well exercise or the Gratitude Visit. They create (or shift our attention to the) positive momentum in our lives to counterbalance the all-pervasive negativity.

The truth is: Each and every one of us has to make an effort for good to be stronger than bad.

But what about our daily lives? Who has the time to perform interventions all the time? The truth is: Each and every one of us has to make an effort for good to be stronger than bad. Good thing is: We do not have to be larger-than-life leaders such as Mahatma Gandhi or Nelson Mandela do make an impact. It´s the little things that count (a.k.a. micro-behaviors) – if they come in large amounts. A smile. A thumbs-up. An affirmative nod. A pat on the back. Putting the toilet lid back down…

If you need more inspiration, watch this – again and again if you like:

* For the expert reader: she may have gotten the math wrong initially – but the phenomenon itself can hardly be called into question.