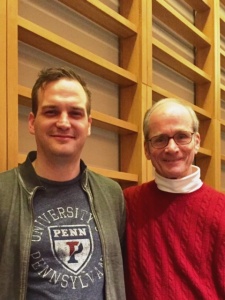 If you´ve visited Mappalicious in the past, you´ll have noticed that I´m a big fan of Self-Determination Theory that was developed by Edward Deci and Richard Ryan. It shares a lot of common ground with several areas of Positive Psychology but has developed as a stand-alone body of research since the early 1980s.

Being so enthusiastic about the topic, I was absolutely thrilled to learn that Edward Deci would be a presenter at this year´s Penn MAPP Summit. Dr. Deci was so kind to take a photo with me. I´ve twittered all throughout his lecture – so here´s a sort of best-of Self-Determination Theory in Deci´s own words and charts. Enjoy!

Ed Deci/@UofR #10yearsofMAPP: Quantity of Motivation does not determine Behavior. It's the #Quality of #Motivation. pic.twitter.com/QjITXwBA84

Ed Deci at #MAPP: in self-determination theory, autonomy does not mean independence- it's about willingness.

"How can I get my kid to be more motivated to #play?" Parents. Never. Ed Deci at #10yearsofMAPP #Intrinsic #Motivation @UofR @PennLPS