On September 22, the ‘Bundestag elections’ will take place. The Germans are to decide which political party (or rather, coalition of parties) is to govern the ‘nation of poets and thinkers’ over the upcoming four years. Pollsters are very sure that the Christian Democratic Union (CDU, lead by Angela Merkel) will be victorious – but that does not necessarily mean Merkel will be able stay in the chancellery. The Free Democratic Party (FDP), Merkel´s ‘natural’ coalition partner, may turn out to be too weak to go on with the reigning coalition. Apart from the results per se, I´m really curious to see what the voter turnout is going to be. The following graph (© Wahlschlepper) shows this figure for every Bundestag election since 1949: 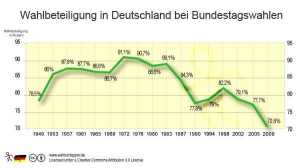 Obviously, there is a steep decline of voter turnout (or rather: a notable increase in the numbers of nonvoters) since the 1998 election that lead to the voting out of Helmut Kohl. Before that, a decline is observable as well, beginning after 1983, the year, Kohl was re-elected for the first time. I guess, all throughout the 80ies, a lot of people (his supporters as well as his opponents) thought Kohl was going to win anyway – so there was no need to show up.

But I feel it´s something else when looking at the years after Kohl´s dismissal. I wonder if this increase in nonvoting behavior can be explained by the theory of Learned Helplessness (LH). Martin Seligman spent most of his career prior to becoming one of the founding fathers of Positive Psychology in the not-so-positive realm, e.g., studying the nature of depression – which eventually led to his formulation of the theory of LH. In an nutshell, this is a psychological state that leads to behaviors such as passiveness and apathy. It can be elicited by exposing subjects to conditions where they repeatedly experience that their actions have no effect on the outcome of future events (e.g., avoiding a painful electric shock). A lack of control with regard to future events makes people impassive – and oftentimes, miserable. So where is the link to the upcoming elections?

Put simply: since Helmut Kohl´s dismissal, in Germany you can pretty much not be sure any more about getting those politics you´ve voted for. And I´m not talking about silly voting pledges here. I´m talking about the fundamentals of what it (supposedly) means to be a ‘conservative’ as opposed to being a ‘liberal’. Lets put aside for the time being that the political landscape in Germany may be a bit more complicated that its U.S. counterpart – mainly due to the existence of several smaller parties in addition to the ‘big two’: the Christian Democrats and the Social Democratic Party (SPD).

Now suppose you vote for the Republican party in the U.S., they win – and a certain time after the election, they cut down on the military budget, start to mess with the nuclear power lobby, or think out loud about a financial transaction tax. Or, on the other hand, you vote for the Democrats, they win, and shortly after the election, they lower the top income tax rate, pass a bill that severely cuts the welfare budget, and becomes immensely popular among the nations corporate top executives. Sounds strange? But basically, that is what has happened in Germany over the last decade.

Gerhard Schröder, social-democratic chancellor from 1998 – 2005 (in a coalition with the Greens) has…

By Armin Linnartz via Wikimedia Commons

Angela Merkel, with her ‘conservative’ coalition, on the other hand, since 2005 has:

So is this the reason for the German ‘Politikverdrossenheit’ (disenchantment with politics)? Because we cannot be sure we´ll get what we vote for? Anyway, pollsters say there´s a considerable likelihood for a new edition of the ‘Grand Coalition‘ (a coalition of CDU & SPD). Both Merkel and her opponent, Peer Steinbrück do not grow tired of saying that this would be the worst outcome. But I guess, in secret, that´s a wrap already…